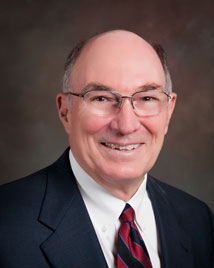 Jimmie B. Todd is the founding attorney and President of Todd, Barron, Thomason, Hudman & Bebout, P.C. He grew up in Perryton, Texas, completed his Bachelor of Science in Commerce at Texas Christian University (1960), received his Doctor of Jurisprudence from the University of Texas at Austin (1963) and became a Certified Public Accountant (1964).

After moving to Odessa, he became involved in community service where he assisted in securing UTPB for Odessa and helped establish the Village Place Charitable Trust. He has also served with the Boys Club of Odessa, Permian Basin Rehabilitation Center, Odessa Downtown Lions Club, Meals on Wheels and United Way of Odessa. He is also a Deacon at First Baptist Church and serves as a Director at Western National Bank.

In addition to his community involvement, he is a legal advisor to hundreds of closely held corporations in the Permian Basin area, provides estate planning and probate service.